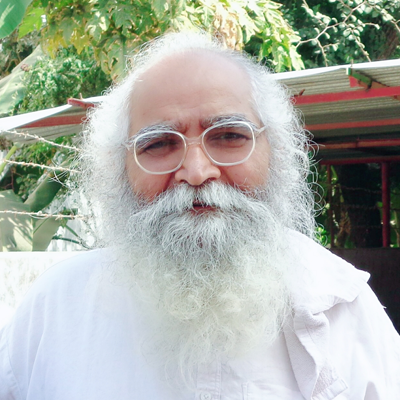 Dashrathbhai Atmaramdas Patel, lovingly and respectfully called “Bapuji” is one of the spiritual luminaries of modern times. As he shuns publicity and so-called Guruhood, may be many people do not know him or have heard of him. He is a true seeker of the truth and divine Absolute Knowledge. He lives the life of a recluse hermit without labeling himself as a Sanyasi. From his Childhood, he dreamt of changing the world and liberates it from the problems and sufferings. He not only read the Vedas and the Upnishads, but also astral science, modern para-normal psychology to broaden his vision and understanding. He read about other religions like Christianity, Islam, and Zoroastrianism to grasp the basic concept of these religions. His attitude is completely secular accepting the philosophy of “Sarva Dharma Sadbhava”. Divine knowledge is the characteristic of a yogi and his knowledge of the Infinite began to emerge in Bapuji. It was revelation of the Supreme knowledge that came gradually from the Almighty Authority. Almighty authority is the controller of the billions of multiverse. He always called himself the messenger of the Absolute authority and infinite knowledge. He also consider himself as “Vishwa Kalyankari” (World welfare agent) or ” Visha Sewadhari” (the World Benefactor) soul.

For Bapuji “Yog” means “to be connected with the Almighty Authority”. He firmly holds that only soul can search Paramatma, Jeeva only revolves through the cycle of birth and death. Bapuji’s aim of life is to impart the divine knowledge to all souls and transform them to supreme souls through knowledge. To become supreme souls, one needs to have the knowledge of the Absolute Authority.

In 1997, Bapuji set up ashram In Chenpur village called “Vishwa Parivartak Ishwariya Vidyalaya” (World changing Godly House of Learning). People started coming to him for Spiritual knowledge since 1997. He imparted the knowledge that he received during yoga and meditation. The infinite knowledge emerged within him in his meditative state.

Bapuji’s Philosophy / Discourses / Knowledge
Bapuji has talked about so many topics in his videos and books which he has attained in his meditative state. He could visualize the infinite visible world and the infinite worlds which is beyond to the beyond imaginations. He often talks about non-manifest worlds and its creations. He has covered many questions which has always creeping in the minds of highly spiritual beings-consciously or subconsciously. Through his divine intellectual he has answered to many hidden facts that talk about “Life after Death”, “Astral Projection”, “Discoveries and History of Science”, “Modern Science”, “Creation of the Universes”, “The World Cycle”, “Ancient Aliens”, “UFO Science and Technology”, “Elements have Memory”, “Healers and how they works”, “Secrets on Shiva”, “Hindu Mythology and God-Goddesses”, “Secret of Mediums”, “Future World”, “New Era and Transformation of the whole universe”and many more. For this you can visit Bapuji’s Official YouTube Channel – www.youtube.com/anant98251

Bapuji’s Life Purpose
Bapuji states that the Almighty Authority gives him vision and shows him all the infinite Boundless Universes. The Absolute Authority emerges the knowledge in Bapuji and shows him the stars, Galaxies, universes, multiverses and the world beyond to the beyond infinity. This is the reason what Bapuji want others to realize and vision through his knowledge becomes difficult to interpret and put in words. Bapuji always talks about Boundless (Behad) Universes and Boundless (Behad) Children who will bring change to the world through the power of Thoughts (Sankalpa) . Bapuji says that earlier there was Param Prakash or Divine Light. We may call it Supreme Divine Radiance. Initially at the beginning of the world, there were no elements (Tatvas). Five Elemental beings came into existence later. Earlier there was pure Energy. The Absolute Authority original form was made of Supreme Radiance. 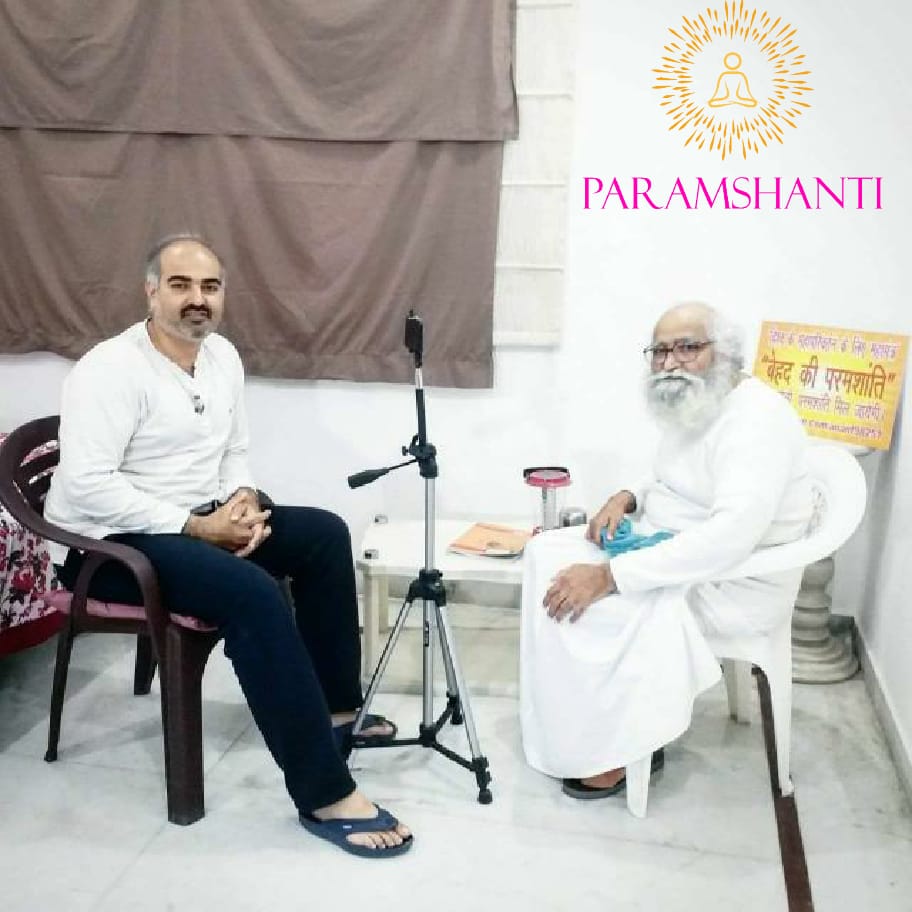 Paramshanti.org is the official website of Pujya Bapuji Dashrathbhai Patel who has given the world, knowledge of the infinite, vibrations of supreme peace – Paramshanti and also transformation of the earth and beyond, into a divine spiritual place by focussing on transformation of one’s self.

In order to achieve Bapuji’s grand mission of spreading true knowledge to mankind and to achieve world transformation , his son Anant Patel is now leading the organisation.

Anant who is popularly known as Anantbhai, by profession is an Advocate & Income Tax Consultant in Ahmedabad. However, from 2013 he has given up the legal profession for a more enriching and soul satisfying role of
a motivational speaker, life coach and spiritual counsellor .

He offers spiritual knowledge and spiritual guidance daily through his live YouTube program on Bapuji Dashrathbhai Patel channel. Having an extensive knowledge of spiritual as well as practical life, Anantbhai guides people into the spiritual path through teaching and conducting meditation as well as on Behad or infinite knowledge.

Anantbhai is highly appreciated and popular for his inspirational talks and practical take on leading a life dedicated to spirituality.

In March 2020, the coronavirus crisis & the enforcement of a total lockdown throughout the country inspired Anantbhai to start his live meditation program from 10pm to 11pm daily on
YouTube so as to attend to the need for a spiritual solution at a time when people had become despondent and full of fear due to the virus.

Intially the program started with meditation for self realisation and connecting to God which was an empowering experience to all. However, the thirst for knowledge led to daily 10 minutes discussion by Anantbhai on spiritual topics or on the vast Behad knowledge given by Bapuji .

Few months later, based on the huge positive feedback Anantbhai started to focus on a vast range of spiritual topics that are from the Bhagavad Gita , Ramayana, Shrimad Bhagavat,
the Vedas, Puranas and Upanishads etc.

At the same time he has also done lot many shows on the scientific side of spirituality such as DNA, connection between human brain and meditation , explored many aspects of the paranormal, ghosts, angels, ancestral spirits, afterlife experiences etc .

Health & wellness topics such as overcoming grief due to death / loss of loved ones, depression, positive mindset, motivational topics for self improvement , exploring Patanjali yoga concepts, various ways of meditation etc have helped the audience immensely.

Anant strives to connect the ancient Indian spiritual knowledge with modern science by valid and fact based explanations, alongwith with the infinite knowledge given by Bapuji.

The latest developments in the field of astronomy such as the James Webb telescope, and also on UFOs, aliens , alien presence on earth, extraterrestrial life etc have all been meticulously discussed several times on his channel.

He explains all knowledge in a simple yet logical way so that spirituality can be understood by the common man to attain self realisation and God realisation in an easy way, by balancing both spiritual and worldly life.

At present,
750 plus Live YouTube programs have been conducted till date and is one of the most popular daily live program on youtube on spirituality with an ever increasing base of new subscribers to the channel www.youtube.com/anant98251.

He has conducted more than 1000 interviews with Bapuji on different spiritual topics that have been uploaded on the website Paramshanti.org and one can watch these information packed videos on his Youtube channel at youtube.com/anant98251.

You can easily connect to him through email at anant@paramshanti.org ,
https://www.instagram.com/one.minute.realization/
“Self realisation for each and everyone and manifestation of one’s own divinity by transformation of self through vibrations of Paramshanti” is a strong vision that Anantbhai is selflessly working for. He lives in Ahmedabad alongwith his spouse Sakshi Patel who has ably supported him in this mission.
https://instagram.com/sakshi_rising_soul.

Recently, they have co-authored a book
‘Life in Multiverse’, available in Hindi, English as well as in eight regional Indian languages.
The book, Life in Multiverse explains the concept of multiverse and the various universes, galaxies, solar systems contained within and their creators as per Bapuji’s divine vision. Basically the book contains a summary of the teachings of Bapuji in a nutshell.

Anant believes that the right amount of spiritual efforts by a person and the right spiritual knowledge alongwith vibrations of supreme peace / Paramshanti created by the spiritual soul will ultimately enable the light body transformation of not only that soul but of all souls in the earth quite soon in the near future, paving the way for a beautiful new world of supreme divine light and supreme divine elements.